Make a reservation at the restaurant
L'Oustau de Baumanière***

Let yourself be surprised by the refined and creative cuisine of Chef Glenn Viel.
You can choose from the "1987- Vegetable Menu" or the "A Stroll" menu.

For all reservations, a bank guarantee of 100€ per person will be required. In case of no-show or cancellation less than 24 hours before your arrival, this guarantee will be debited.

For the smooth running of the service we ask you to respect your arrival time. In case of delay, please inform us to ensure the availability of your table.

Our last orders will be taken before 1.15pm for lunch and before 9.15pm for dinner.

Our menu "A stroll" in 8 courses is not available after 1pm and 9 pm.

For the comfort of our guests and the well being of our teams, in case of strong heat, the restaurant reserve the right to do the set up of the tables inside.

For everyone's comfort, Appropriate dress is required. , shorts and flip-flops are not permitted. Gentlemen, trousers must be worn for dinners.

Make a reservation at the restaurant
La Cabro d'Or

Let yourself be surprised by the tasty Provencal cuisine of Chef Michel Hulin.
You can enjoy the lunch menu, the Gourmandise menu, or the a la carte menu - unique menu served on Sundays and public holidays.

For any booking of 7 people and more, the same menu will have to be ordered for all the guests (« A la carte » dishes unavailable).

For all reservations, a bank guarantee of 50€ per person will be required. In case of no-show or cancellation less than 24 hours before your arrival, this guarantee will be debited.

For the smooth running of the service we ask you to respect your arrival time. In case of delay, please let us know so that we can assure you of the availability of your table.

Our last orders will be taken before 1:15pm for lunch and before 9:15pm for dinner.

Our menu "Gourmandise" is not available after 1pm and 9 pm.

For everyone's comfort, proper attire is desired, shorts and flip-flops are not permitted. 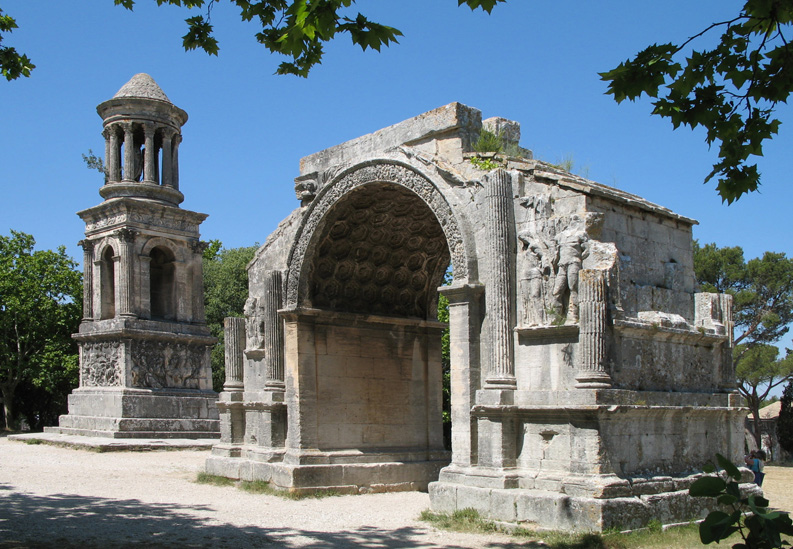 Visit the Roman Provence from Baumanière

During your excursions, you will discover the historic heritage that constitutes Provence. This unique region, situated on the banks of the Mediterranean, was the first region of Gaul to have welcomed the Greek and Roman civilisations. It has kept many vestiges of those periods with its majestic monuments which remain today the main witnesses to the Roman era. We invite you to discover some of these not-to-be-missed places.

Many spots “à la carte” – Leaving from the hotel Baumanière has prepared for you a suggested itinerary that you can personalize. You can consult it directly with your smartphone!
Map of the Roman Provence

20 minutes from Baumanière In the heart of the Alpilles, Saint-Rémy-de-Provence is an essential stop in Provence. Imbued in history, the town was built on an antique site dating from more than two thousand years ago, such as the site of Glanum. Marks of this ancient past, the thermal baths, the Triumphal Arch and the Antique Mausoleum are part of the town and its Provençal sweetness of life.

Archaeological site of Glanum After having been pillaged during the barbarian invasions, the site of Glanum, dating from the 6th century BC, was rediscovered in the last century and archaeological excavations were organised. The ruins of Roman monuments were discovered, such as a Forum, a Curia, thermal baths and temples. The presence of water and it strategic commercial position make it a fascinating site from the period that continues today to arouse a lot of interest, as much with aficionados as with the curious.
Price: 8€
Free for children under 18 years

Between two cultures, the town that we call the “capital of the Camarge” organizes bullfights and taurine events in the same arena that once hosted the Roman games of Antiquity. From its pomp under Roman rule, the town has preserved such remarkable monuments as the antique Roman theatre, the arena, the Alyscamps necropolis and the Roman cirque. Arles and its heritage are part of history from the Roman era up to today.

The Antique Theatre of Arles Built a century before the Arena, the Antique Theatre was rediscovered a few centuries ago and many archaeological objects were unearthed, including the famous “Venus of Arles”. Over time, the edifice has progressively readopted its function as a theatre. In summer, it hosts diverse events such as the festival of Arles and Costumes, the International Photography Festival, the festival “des Suds”…

The Arena of Arles The arena of Arles is a Roman amphitheatre built around 80 AD and inspired by the Coliseum in Rome. Big shows were organized in the arena that can accommodate 25,000 spectators. Today, the town’s main symbol is also the most visited sight in Arles. The Arena hosts bullfights and diverse events for which you will find the programme on the Arena’s website.

Museum of Antique Arles The departmental museum of Antique Arles, called the “blue museum”, is situated in a modern building built on the remains of the Roman circus of Arles. It is an essential part of the town’s ancient history. In 2004, the wreck of a barge dating from the Gallo-Roman era was found on the right bank of the Rhône during an archaeological mission. Excavations were carried out a few years later and thousands of archaeological objects of inestimable value were recuperated from the boat and are now exhibited in the Museum of Antique Arles. Its archaeological collections cover a period starting in the Neolithic up to late Antiquity. Lectures, shows and workshops about the Roman city are organised throughout the year at the museum. Workshops and theme tours devoted to children provide a complete immersion.
Price: 8€
Free for minors and students
Web site of the Museum of Antique Arles

1 hour from Baumanière A Roman colony founded by Augustus, Nîmes was one of the biggest cities in the Roman Empire and one of the most prestigious of the Roman Gaul. It today has an ensemble of very well preserved monuments such as the famous amphitheatre, the temple called “Maison Carrée”, the shrine of the Fountain and the Magne Tower in the gardens of La Fontaine. It’s the occasion to admire all the details of Roman architecture, including the sculpted friezes and bas-reliefs.

The Arena of Nîmes
Built at the end of the last century BC, the arena accommodated up to 23,000 spectators come to see the gladiators and wild animals. In the seating area with its interior galleries, you can visit one of the best preserved amphitheatres from Roman times, learn the history of the gladiators and also the games of Ancient Rome. Each year, shows and festivals with ancient and cultural themes are organized.

The Maison Carrée
Influenced by Greek architecture, the Maison Carrée is an ancient temple built in the Roman era. Over time, it was transformed but today remains in a beautiful state of preservation after all the centuries. It is today a main tourist site that houses the exhibition spaces of the Museum des Antiques de Nîmes. You can visit it on the website for the Maison Carrée to find out what’s going on.

The Musée de la Romanité
This new museum, situated across from the Roman amphitheatre in Nîmes, opened its doors on June 2, 2018. With its futurist architecture, the museum houses archaeological collections reflecting the ancient past of the city of Nîmes. To let the visitor plunge into the heart of the city, the works are highlighted by an innovative scenography for a unique experience. The collections are organized in a chronological and thematic manner. The museum offers the visitor the chance to rediscover the history of the romanisation through audiovisual documentaries, augmented reality, virtual tours and interactive cartography.
Admission price: 6€
Web Site for the Musée de la Romanité

Monument of colossal scope and listed as a world heritage site by UNESCO, the Roman aqueduct of the Pont du Gard is more than two thousand years old. A veritable wonder from Antiquity, throughout the year activities and festivities are organized there, such as the Fééries du Pont du Gard. To find out more, consult our page or the the website of the Pont du Gard.

Orange is a town that possesses a number of wonders, including two listed monuments. Remains from the Roman era, the imposing Antique Theatre as well as the Triumphal Arch give the town its particular character. During your visit, you will discover these ancient monuments in a mellow atmosphere and a typically Provençal climate.

The Roman Theatre of Orange
One of the best preserved Roman theatres in the world, it is the city’s main monument. It was built under the reign of Augustus in the 1st century BC and accommodated up to 9000 spectators thanks to its structure and exceptional acoustics. Today, listed as a World Heritage Site by UNESCO, the theatre hosts tours, activities and performances.
The Chorégies, the internationally renowned French opera festival, take place here since 1869. To learn what’s going on and for more info, you can consult our page on the Festivals in Provence.