Let yourself be surprised by the refined and creative cuisine of Chef Glenn Viel.

Please contact us to book a table with a gift box or if ou have already booked a room.

Weekly closure every wednesdays and tuesdays.

Let yourself be surprised by the Provençal & tasty cucineofcnes Miche Hulin

Please contact us to book a table with a gift box or if you have aready booked a room.

Weekly closure every mondays and tuesdays from half october to half march. 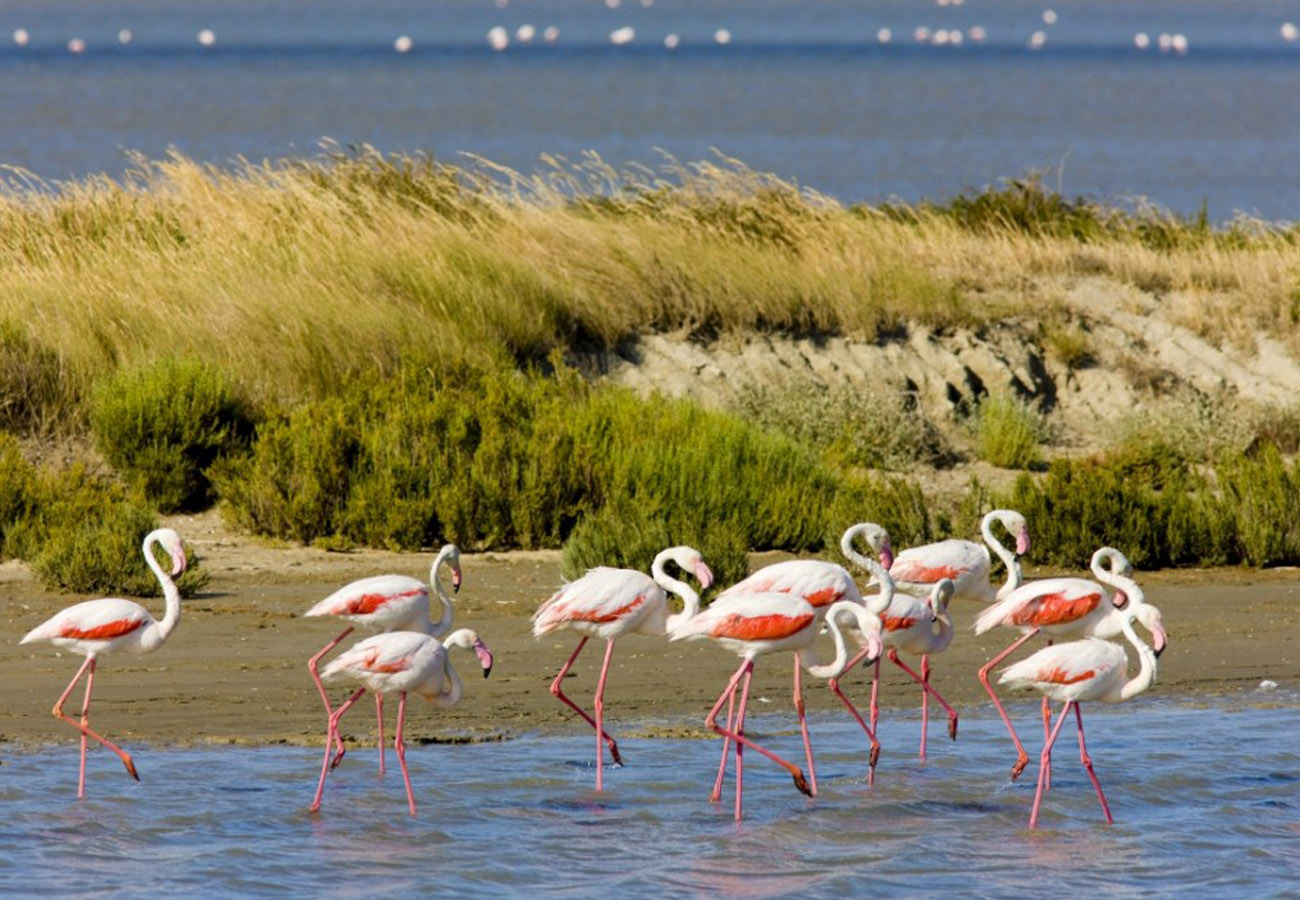 Visit the Camargue from Baumanière

Listed by UNESCO as a Biosphere reserve, this region boasts a very rich flora and fauna: marshes, ponds and the seaside, wild beaches, natural reserves, for a complete change of scenery…

3 itineraries “à la carte” – Leaving from the hotel Baumanière has prepared for you a suggested itinerary that you can personalize. You can consult it directly with your smartphone!
Itinerary Map
A picnic basket to take along with you? A car or electric bike rental?
Our team will take care of it all for you!
Contact us at 33 (0)4 90 54 33 07 or by e-mail

• Our advice: Don’t let the sun spoil the pleasure!
Take with you a hat, water and sunscreen! And above all, don’t forget your swimsuit and towel! Leaving from Baumanière you are 30 minutes from Arles, the gates to the Camargue.
You can stop off at the Montmajour Abbey founded by the Benedictine monks on a rock island in 948 AD. Today, the abbey offers a very varied cultural programme.

Visiting Arles takes you on a journey through time. This town, situated on the banks of the Rhône, is full of art and history. Once the provincial capital of Ancient Rome, its old centre boasts many ruins and monuments listed as world heritage sites by Unesco and which today host theatre pieces, concerts and bullfights. It is also the town that inspired Vincent Van Gogh, who drew his inspirations from the landscapes of Arles. But Arles is also famous for its contemporary art, with the Luma foundation that, together with the Camarguaise traditions, make the town very lively and authentic.

• Useful Info: map of Arles
• Monuments to see: the amphitheatre, the Arena, the St Trophisme cloisters, the Alyscamps A very colourful weekly market takes place every Saturday and Wednesday morning. Colours and flavours await you on the stands!

Here is our selection of museums:

Fondation Van Gogh Situated in the centre of Arles, the Foundation Vincent Van Gogh is an art centre devoted to the work of Vincent Van Gogh. Original works are presented in parallel with those of contemporary artists, rendering homage to the Dutch master in the form of temporary exhibitions taking place once or twice a year. The Foundation is located in the hotel Léautaud de Donines, an edifice dating from the 15th century which has recently been restored for the centre’s opening in 2014. The building itself is interesting for its remarkable play of light.
Price: 9€
Free for children under 12 years.

LUMA Foundation Founded in 2004, la fondation LUMA is a cultural centre for contemporary art that supports projects of independent and committed artists in the domaines of art, photography, publishing, documentaries and multimedia. Spread out over 10 hectares of a former industrial wasteland, the LUMA foundation, of which 6 hectares of the site are devoted to gardens, is a pioneer in Europe for a philanthropy project of such magnitude. Symbolised by a tower built at 56 metres from the ground and covered in steel bricks, its was designed by Frank Gehry, the architect of the Guggenheim Museum in Bilbao. Exhibition Price: 7€ – The visit of the workshops park is Free.

Musées des Antiques
The departmental museum of Antique Arles called the ” blue museum” is situated in a contemporary building built on the remains of the Roman circus of Arles. It is a key spot in the ancient history of the town. The archaeological collections exhibited there cover a period going from the Neolithic to Late Antiquity. Conferences, performances and workshops are organized throughout the year on the theme of the Roman city. workshops. Workshops and a theme tour for children provide for a complete immersion. Price: 8€ – Free for minors and students

The Camargue opens up many possibilities, depending on your desires and humour.

Here are some “à la carte” suggestions at 1 hour by car from Baumanière:

Nicknamed “the mining cottages of the south”, this cosmopolitan village, implanted by the Pechiney and Solvay factory towards the end of the 19th century, housed all the workers who came from Italy, Greece and Armenia to extract the white gold of the Camargue: its salt. These communities are still present today at the Salins du Midi Company.

Medieval city of the Camargue from the 13th century, protected by its ramparts, Aigues-Mortes signifies “Dead Waters” and owes its name to the marshes and sea ponds that surround it. Its gothic style architecture includes the ramparts and the keeps, from the top of which you can admire the landscapes of the Camargue. Children can participate in a treasure hunt every day in summer.

Between beaches and ranches, there is this legendary land of welcome, of traditions and pilgrimage. The church, a refuge, was also a fortress with its roof encircled by a parapet walk with crenellations and machicolations which served as a watch tower to protect against pirate invasions in the 9th century.

To see: once the homes of farm workers, the Ranchers’ cabins with their whitewashed walls and thatched roofs of reeds from the marshes, dot the landscape of the Camargue

To discover: the Regional Nature Park.
Bulls, horses and birds are part of the Camargue landscape. Integrated into the Natura 2000 network to maintain the biological diversity, the Camargue offers diverse discovery trails.

Pont de Gau: this ornithological park offers a 90 minute walk. Along the trail, you can observe the many birds. You will probably spot pink flamingos, terns, stilts, bearded reedlings, egrets, ibis, herons, warblers and many others.

Chevauchée Camarguaise: Visit the authentic Camargue on horseback, far from the roads and the beaten track. It gives you the possibility of reaching unique, untamed sites by crossing the marshes as only a horse can do. 2 hr in another world: 40€/person

Les Cabanes de Cacharel
On horseback or in a carriage: starting at 22€/person On this site, you will also learn more about Camargue bull farming.

Our advice: go for the last session of the day, when you will see the beautiful light of the setting sun.